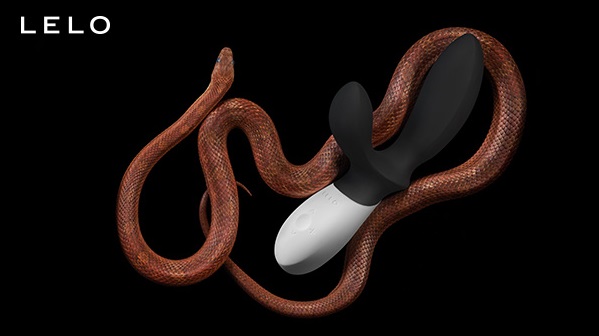 I don’t like to deal in absolutes (only sith do that, obviously), so I’ll say this: the Loki Wave by LELO is probably the most high-tech prostate massager on the market.

What a time to be alive.

This trend, however widespread, skipped the humble prostate massager, leaving some handy sex toy MacGyvers to find ways to re-appropriate other kinds of toys in the pursuit of p-spot stimulation. At least that was the case until earlier in the year, when the prostate massager was given a high tech, luxury makeover by LELO in the form of four brand new toys, all platinum silicone coated, rechargeable, and fully waterproof.

LELO, renowned maker of luxury adult products, had delved into the realm of prostate massage only twice before this year, with Bob, a silicone plug, which has since been discontinued (its 24kt gold or steel Luxe counterpart are still in production, retailing for roughly $2000-$3000), and Billy, a simple curved vibe similar to the earlier model of the Liv, with a flange for safe anal insertion. While well received when released, the Billy was left behind as other toys from the same line were upgraded to be both stronger and waterproof. Especially when compared to the volume and frequency of the release of new and innovative toys designed for women (and all people with clitorises and vaginas), the prostate massager had been seriously neglected by LELO, and indeed nearly all high-end toy companies. Then in one fell swoop they made up for it and then some, with the simultaneous release of the Hugo, Bruno, and Loki, and shortly thereafter, the Loki Wave.

The Loki and Loki Wave from LELO’s Homme line are the anal-friendly versions of the popular Mona and Ina LELO Femme designs, a standard and dual vibe, respectively. Like its Femme counterparts, the Loki Wave features a considerately shaped shaft with an insertion-assisting pointed tip that swells to a one-and-a-half inch diameter before tapering back down into a slim neck. This shape, which is set at a gentle angle, follows the natural curve of the rectum (and vagina), which allows for a feeling of fullness that works with your body rather than against it.

From left to right, the Ina Wave, Mona 2, Loki, and Loki Wave

The Loki Wave has two points of attack, with the larger, insertable portion of the toy tucked against the prostate from behind, while the firm-yet-flexible external arm pushes up against the perineum, stimulating the gland from underneath with vibrations that range in intensity from a tremble to a deep, penetrating rumble that eclipses the power of nearly every other LELO toy. Like with all LELO toys, the intensity of vibration can be controlled over a selection of modes of pulsation by means of the intuitive five-button interface.

The latest release of the Mona and Ina had seen the addition of a new function- the Wave, or a “come hither” movement of the shaft. This unprecedented tech received rave reviews for its unbeatable g-spot stimulation, and it just made sense to bring the Wave into the world of prostate stimulation. Check out the video below to see it in action:

Like all of LELO’s latest toys, the Loki wave is now completely waterproof as well as rechargeable, with a whisper quiet motor encased in a firm ABS plastic body coated in velvety medical grade silicone.

LELO’s new releases have brought the prostate massager into the 21st century, something we (and our customers) couldn’t be happier about. To check out the Loki Wave and the other toys in the LELO Homme line, visit us in-store!