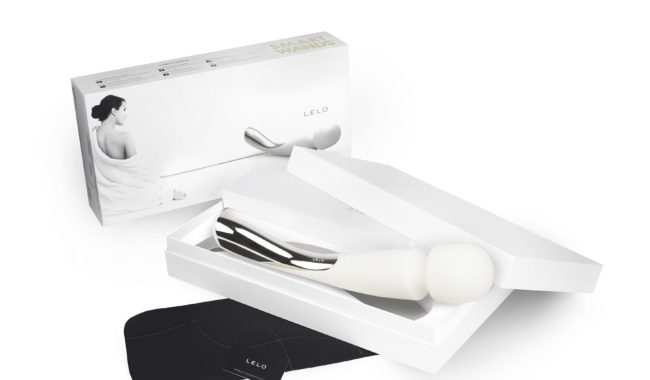 The following is a review of the LELO Smart Wand Large, written by a Little Shop of Pleasures staff member.

For this review I will be joined by the lovely Lara. Say hi, Lara!

“Hi, frisky folks, super excited about this big guy … and the toy as well! ;)”

The Lelo line of toys is the freaking Cadillac of ‘pleasure objects’, as they call themselves. Everything about them says quality; even the sleeves over the boxes are discreet, but classy and informative. Once you pull the sleeve off, you’re left with a strong plain box perfect for keeping your toy in up on the shelf and no one would have to know what’s in it. The high price point reflects the quality you see in the materials used, they just feel better and in many cases are safer than the competition.

Once you get inside the box the real magic starts. I bought the large white deluxe model so it came with an instruction manual, the large wand charger, a one year warranty card, Lelo brand toy cleaner, a very nice soft toy case to keep hair and dust off the toy, the Lelo pin that they include with some of their toys – I can’t wait to see someone else with their pin on! – and last but not least, the big bad Lelo Smart Wand!

Many people see the Large Smart Wand as the next evolution of the Hitachi Magic Wand [Editor’s note: The Hitachi Magic Wands is now called The Magic Wand Original. the re-branding happened after this review was first published], which is the most powerful hand-held toy I have ever seen. Sadly, it needs to be plugged into a socket at all times when its running, so with a short, 5-foot cord, an extension cable is needed to run it effectively, and then you have to worry about the cable in the bed. Lelo’s Smart Wand is fully cordless when it’s charged, or you can run it with the cord plugged in if you need a little more time. The Lelo Smart Wand runs at approximately the same speed as the Hitachi’s lower setting (The Hitachi only has two settings high and HOLY F*#K TOO HIGH!) The Lelo smart wand has a huge gambit on eight different settings, but the one mode that stands out is the heat sensitivity. The more you touch it, the more it touches you! By pressing and holding the middle button -you can set any vibration to be heat.

Once you have it out of the box, plugged it in, and charged (which takes about 2 hours) grab your new toy and shove it down your pants… or not! See, the Wand can be used for other things, too! I’m serious, don’t look at me like that! The Smart Wand can be used for massage and is well designed to do so. The curve and heat sensitivity was great for my back, neck, and sore leg. That being said, first thing I did when it was fully charged was push it onto any nerve bundles I could feel, so my entire arm, for example, tingled as the deep and powerful vibrations went from my elbow to my fingertips. Putting the wand on my forehead and running it around different places on my neck produced a very strange and sometimes jarring effect on my vision and inner ear. With the stylish and non-threatening look, using this toy around the house in socially accepted places should be no problem around roommates or family members.

But I digress, into my pants.

Having XY chromosomes, I thought I would be out of luck for in-pants pleasure with this toy but I was happily surprised. I understand that many men do not like heavy vibration directly on their penis. That being said there are plenty of other places to use this magical toy. One thing I found is that if you wear underwear while using it, the ‘sharpness’ of the vibration is dulled but it helps spread is all over your package. The toy can be used on the testicles or pressed onto the taint (the sometimes forgotten piece of body between you anus and sack) for external prostate play.
As for using it right on the bare penis, that will take some experimentation. I found that the fine lines between “Ohhh yeaaaaa….” and “F*ckOWW” were very close indeed, so the heat sensitive setting was a god send for finding just the right speed and pressure. This could be a fantastic toy for teasing/building up to orgasm but for me a little more ‘manual’ stimulation was needed. I look forward to adding the different attachment available for both my dick and prostate; this is a very versatile toy indeed.

Now onto Lara’s pants for hew part of the review!

Well, hello there! I think my review of this toy can be summed up in nine words: ‘I think I came eight times in a row!’ After using it for the first time, those were the first words I was able to manage.

To share a little of my sex toy background, I don’t use vibrators a lot. I have been using them for several years, but only sporadically. I try not to let my body get used to orgasming from only one type of stimulation, which is the female version of the ‘death grip.’ I’ve also never played in my pants with a Hitachi, so there’s a chance that my lady bits were more sensitive because they’d never felt this type of strong stimulation before.

Aesthetically, I love the Lelo toys. They are so sexy and soft to the touch that I don’t want to stop caressing them! This doesn’t cause any problems, even when the toy is covered in lube, though. It doesn’t get slippery when wet; it actually has a bit more grip. I, too, think that the toy is good used on non-genital parts of the body. It did a good job on one of my shoulders and my sore neck muscles.

As for how it feels in my pants… There are no real words to describe the feeling, only onomatopoeic sounds with lots of gasps. I’ve never had multiple orgasms in quick succession before this, but the first time I used it, I had climaxed at least eight times within a minute or so. I wasn’t exactly counting, though. If you’ve never used a Smart Wand or Magic Wand, either, then when you do for the first time, you might want to put a towel down. Just throwing that tip out there. I definitely made a big enough mess to need one!

The other times we used the toy, we used it during doggie style positioning, and Jamie says he loved it. The vibrations caressed his balls quite nicely through some direct contact and some diffused through my skin. We also tried this in other positions, in combination with a Liberator Moustache Wedge placed under my butt. As fun as the Wand is on its own, it’s even better when used during sex.

My only reservation with this toy is the chance that I could become addicted to it, and do nothing but lie on my bed all day with it between my legs, and an IV in my arm to keep me hydrated. It’s that good. I wouldn’t have to worry about getting bored, as there are plenty of attachments that you can use with it. The attachments are high quality silicone and they slip over the head easily, and they provide a wealth of different sensations, with bumps and ridges to reach all the sensitive bits. There are even some that have insertable parts, for either gender to enjoy!

Thanks for letting me be a part of the review!